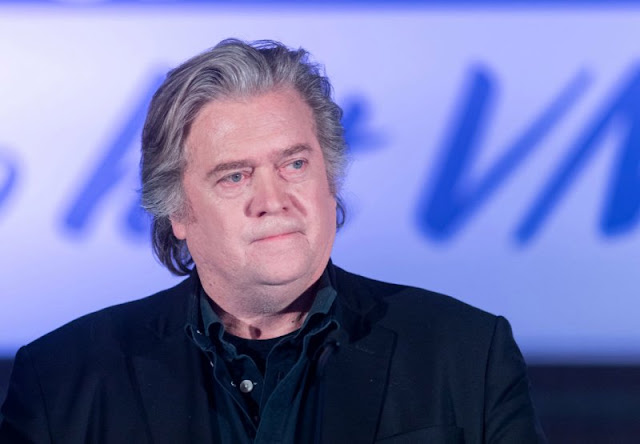 Brian Kolfage, Stephen Bannon (ABOVE), and Two Others Alleged to Have Funneled Hundreds of Thousands of Dollars From the Organization to Kolfage; All Four Defendants Allegedly Profited From Their Roles in the Scheme
Audrey Strauss, the Acting United States Attorney for the Southern District of New York, and Philip R. Bartlett, Inspector-in-Charge of the New York Field Office of the United States Postal Inspection Service (“USPIS”), announced the unsealing of an indictment charging BRIAN KOLFAGE, STEPHEN BANNON, ANDREW BADOLATO, and TIMOTHY SHEA for their roles in defrauding hundreds of thousands of donors in connection with an online crowdfunding campaign known as “We Build the Wall” that raised more than $25 million.
The defendants were arrested this morning. KOLFAGE will be presented today before U.S. Magistrate Judge Hope T. Cannon in the Northern District of Florida.
BANNON will be presented today in the Southern District of New York. BADOLATO will be presented today before U.S. Magistrate Judge Thomas Wilson in the Middle District of Florida. SHEA will be presented today before U.S. Magistrate Judge Kristen L. Mix in the District of Colorado.
The case is assigned to U.S. District Judge Analisa Torres in the Southern District of New York. Acting U.S. Attorney Audrey Strauss said: “As alleged, the defendants defrauded hundreds of thousands of donors, capitalizing on their interest in funding a border wall to raise millions of dollars, under the false pretense that all of that money would be spent on construction.
While repeatedly assuring donors that Brian Kolfage, the founder and public face of We Build the Wall, would not be paid a cent, the defendants secretly schemed to pass hundreds of thousands of dollars to Kolfage, which he used to fund his lavish lifestyle.
Inspector in-Charge Philip R. Bartlett said: “The defendants allegedly engaged in fraud when they misrepresented the true use of donated funds. As alleged, not only did they lie to donors, they schemed to hide their misappropriation of funds by creating sham invoices and accounts to launder donations and cover up their crimes, showing no regard for the law or the truth.  This case should serve as a warning to other fraudsters that no one is above the law, not even a disabled war veteran or a millionaire political strategist.”
According to the Indictment[1] unsealed today in Manhattan federal court: Starting in approximately December 2018, BRIAN KOLFAGE, STEPHEN BANNON, ANDREW BADOLATO, and TIMOTHY SHEA, and others, orchestrated a scheme to defraud hundreds of thousands of donors, including donors in the Southern District of New York, in connection with an online crowdfunding campaign ultimately known as “We Build The Wall” that raised more than $25 million to build a wall along the southern border of the United States.
In particular, to induce donors to donate to the campaign, KOLFAGE repeatedly and falsely assured the public that he would “not take a penny in salary or compensation” and that “100% of the funds raised . . . will be used in the execution of our mission and purpose” because, as BANNON publicly stated, “we’re a volunteer organization.” Those representations were false. In truth, KOLFAGE, BANNON, BADOLATO, and SHEA received hundreds of thousands of dollars in donor funds from We Build the Wall, which they each used in a manner inconsistent with the organization’s public representations.
In particular, KOLFAGE covertly took for his personal use more than $350,000 in funds that donors had given to We Build the Wall, while BANNON, through a non-profit organization under his control (“Non-Profit-1”), received over $1 million from We Build the Wall, at least some of which BANNON used to cover hundreds of thousands of dollars in BANNON’s personal expenses. To conceal the payments to KOLFAGE from We Build the Wall,
KOLFAGE, BANNON, BADOLATO, and SHEA devised a scheme to route those payments from We Build the Wall to KOLFAGE indirectly through Non-Profit-1 and a shell company under SHEA’s control, among other avenues. They did so by using fake invoices and sham “vendor” arrangements, among other ways, to ensure, as KOLFAGE noted in a text message to BADOLATO, that his pay arrangement remained “confidential” and kept on a “need to know” basis. * * *
KOLFAGE, 38, of Miramar Beach, Florida, BANNON, 66, of Washington, D.C., BADOLATO, 56, of Sarasota, Florida, and SHEA, 49, of Castle Rock, Colorado, are each charged with one count of conspiracy to commit wire fraud and one count of conspiracy to commit money laundering, each of which carries a maximum penalty of 20 years in prison. The statutory maximum penalties are prescribed by Congress and are provided here for informational purposes only, as any sentencing of the defendants would be determined by the judge.
Ms. Strauss praised the outstanding investigative work of the USPIS and the Special Agents of the United States Attorney’s Office for the Southern District of New York. She also thanked the U.S Attorney’s Office for the Northern District of Florida for their assistance.
The case is being handled by the Office’s Public Corruption Unit. Assistant United States Attorneys Nicolas Roos, Alison G. Moe, and Robert B. Sobelman are in charge of the prosecution. The charges contained in the Indictment are merely accusations. The defendants are presumed innocent unless and until proven guilty.
CLICK HERE FOR THE FORMAL CHARGING DOCUMENT
SHARE ON FACEBOOK, GOOGLE 1-+ Randy Economy on Thursday, August 20, 2020